Firstly I’d like to say, I hope you all had a good Christmas and a stress free one.


As I’ve probably said before, my hubby is a very stubborn man. No matter how many times I tell him not to do certain things he still insists on doing them. One of those things is handling sharp objects … like, for example, the razor sharp blade from our food processor!


Well on the 23rd December 2012 one of my worst fears happened - hubby tried to “help” me by drying up some things. One of those things was, of course, the razor sharp blade of our food processor. If I had known he was drying this up I would have taken it off him immediately because he has bad muscle spasms.


Which is exactly what happened. Hubby had a spasm and yes, you guessed it, the blade cut right into his thumb. He yelped and I asked what happened and he replied, “I’ve cut my bloody thumb” (bloody is the right word to describe it). At first we thought it was just a small cut, so I quickly put his thumb under a running tape of cold water. But the second we did, hubby sucked in a sharp breath as the skin opened up and blood came pouring out!


It was clearly a lot worse than we thought, so we wrapped a tea towel around it, held it up and applied pressure. I sat him down and got him some water while I rang 999. I know there are a lot of cuts being made to NHS, so the lack of proper help from 999 was not surprising.


I nervously explained what had happened and was then asked my address and phone number (which I could not remember!). I ended up passing the phone to hubby - he was feeling faint but was able to talk – and the lady on the phone told him that a clinical nurse would ring us back as soon has they could. Meanwhile hubby was still bleeding, despite the fact he was holding it up and applying pressure to it. By this point I was getting more and more stressed out and felt so helpless that I couldn’t do anything except talk to hubby and give him water. I eventually got so stressed and fed up that no first response had come, or that no clinical nurse had rang back, that I decided to check hubby’s cut and bandage it up myself.


The cut was even worse than we thought, blood was just flowing out like god knows what and it was very clear to both me and hubby that he had indeed damaged an artery. So I did the only thing I knew to do and that was ring 999 again. This time the operator was some rude man who asked me the same questions as the other operator and then just said that if the first operator thought it was necessary to send a first response unit then they would have contacted the nearest one and it would be on the way as soon as it was available. He then hung up.


By this time it had already been an hour since hubby had cut his thumb, so you can imagine that I was getting more and more stressed and feeling even more helpless and most of all I felt responsible for what had happened. Not long after I had put the phone down the clinical nurse rang us and again we had to explain what had happened. The nurse eventually said that we would have to make our own way to A&E because has far as they were concerned it was not a life threatening injury.


I was now very pissed off and stressed about hubby. But we rebandaged up hubby’s thumb and made our way to A&E. We waited a few hours and were then seen by a nurse who didn’t even look at hubby’s wound, but sent hubby to have an x-ray. That was done very quickly. Apparently the lady doing the x-ray had to wipe up a big puddle of blood because they had to remove the bandage to get a clear image. The second she removed all the bandage blood poured out all over the x-ray table. Hubby said it was very funny as the lady ran back and forth to the controls to get her images and then to redress his wound J


Anyway, after this was done we were then sent back to the A&E waiting room. It seemed like forever waiting in there and eventually hubby had to go to the loo. Typically the second he was inside, his name was called. I told the nice lady that hubby had just gone to the loo and while we waited for hubby we joked about the fact that his name had been called while he was in there. If we’d known that was going to happen, I would have told him to go 2 hours ago!


Anyway, she took us to a room and examined hubby’s thumb. She said that she thought he may have damage an artery and a nerve, but was not sure because there was so much bleeding and this made it difficult to see what was going on. She then told us that hubby needed to seen by a hand specialist to confirm what she thought. She then went off to talk to one of the hand specialists and we waited for someone to take us to the plastic surgery ward.


An orderly finally came by and when we eventually got to the ward we had another long wait. Both me and hubby were very hungry, when the accident happened we were about to prepare our Sunday lunch, so neither of us had eaten since breakfast. Oh well at least it wasn’t our Christmas dinner … lol


When hubby was eventually seen, the surgeon told us that hubby had severed both his radial nerve and artery, which would need to be fixed with surgery. He was given a tetanus booster and the surgeon then said we would have to come back tomorrow for hubby’s surgery. Great news! After 7 hours of waiting around we’re told “come back tomorrow”. Not really the way we wanted to spend Christmas Eve. 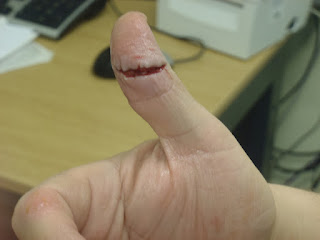 
We got up early on Christmas Eve, picked up some last minute bits of food shopping, took it home and then made our way back to the hospital. This time we made sure we had some food and water with us. And it’s a good job we did really because it was another long wait. We arrived at 10am, even though we’d been told to arrive between 11 and half past. But it was a 5 hour wait before hubby was called to go into surgery. They had no changing rooms, so he had to get changed into his gown in a room that had a bath in it. Not good, but at least we still have an NHS. Hopefully this will not change, but with Ca-moron running things we just don’t know.


Anyway, it was about 3pm when hubby was taken into surgery, which would be done under a local anaesthetic and would involve Microsurgery. I was still nervous about hubby having surgery and the next hour seemed like the longest hour of my life. I was also still feeling guilty about what had happened. But has my hubby says, it was not my fault and I can’t stop him from being him.


Once hubby’s surgery was done he got changed back into his clothes and was told to sit in the waiting room and have a drink and wait for someone to give him some paper work. Hubby told me how the surgery went - he was told that they couldn’t repair the artery, but they repaired the nerve, although they could not guarantee he’d have full feeling in his thumb ever again. It was almost another hour before a nurse finally came with his antibiotics and said we could go.


After what seemed like a very long day we finally made our way home, which after spending 2 days in the hospital seemed like heaven.


Even though my hubby says it wasn’t my fault, I do and will probably always feel responsible for what happened to him.


Happy New Year and take care of each other.