The Importance of Support


The Importance of Support

Support is something that we should all have no matter what the support is for. It is especially important to get it from the person you love most, whether that is boyfriend/girlfriend/wife/husband or just a relative that you are close to.


I’m on a lot of groups on Facebook that are for people that have Fibro and ME and I’m constantly seeing posts from people saying how they’re not getting the support they should from their other half or family.


I can never get my head around this. I really don’t understand how people that are meant to love you can be this way. I’ve seen posts from people saying “my partner say’s I’m not ill or in real pain” and there are also people on these groups that have no one at all caring for them … and yet all these people, all in such pain themselves, are all so supportive to other members of the groups.


My heart goes out to each and every one of you and I can’t thank you all enough for the support and kindness you’ve all shown to both hubby and me.


Just recently hubby was having a really bad time of it with his depression and loads of people on these groups sent him both public and private messages of support, just to let him know they are there if he needed to talk. These same people have also given me words of encouragement when I’ve needed it and general support.


My hubby’s family have also all been so very supportive. I know for a fact they don’t feel like they’ve done much, but they have(!), because they have been there with emotional support for hubby and me when we needed it the most. Some of the things hubby says I know are really hard for them to hear (like when he talks of killing himself), but by staying strong and letting hubby talk things out, it gives him the strength to keep on fighting through the pain and depression.


Of course they have also helped us out in other, more obvious, ways and we’re really lucky that they’re in a position to do this. 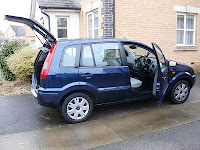 My mother in-law gave us money to buy a more suitable car (a Fusion 2) that is easier for hubby to get in and out of and I can learn to drive in.


My mother in-law and hubby’s step dad also came down recently to take hubby to the hospital for his spinal tap. They even changed their plans when the spinal tap was re-arranged to the following week (on the day!).


While they were down they witnessed hubby having a seizure. Hubby’s step dad helped me get hubby to our bed and his poor mother watched in horror while her baby boy (he’s 40! J) thrashed about, juddered and shook in pain.


Just having them here made such a difference, to me especially when hubby’s step dad said I did everything I could for hubby. I later got hubby’s mother to sit on the bed holding his hand and I’m hoping this made her feel a bit better - I know it made hubby feel better ‘cos he said so J


I know you’re not supposed to, but I really do love my mother in-law to bits. And the same goes for hubby’s step dad. He even drove down to take hubby to his tribunal hearing for his DLA. 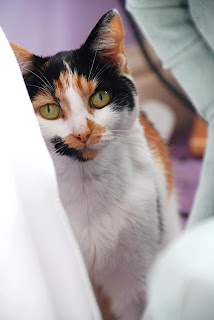 My father in-law and hubby’s step mother have also been a tower of strength. In March we went to visit them when things really got on top of us both and our beloved Babbie Cat had just died L. They were both really supportive and I got to talk about things – plus I felt as though I could take my eyes off hubby for a while and know he would be ok, giving me a little time for myself.


My father in-law will ring every so often to see how we both are and he also reads this blog (hello pops) and sends hubby emails asking how he is and how I am. He bought us this new laptop (which I immediately nabbed for writing my blogs ‘cos it’s really nice J) and has also said he’ll pay for my driving lessons – which will likely cost him a small fortune because it takes me ages to learn things (hehehe) – and has bailed us out with the bank when our ESA benefits were late going in and we’d over spent on silly luxuries like food and heating, etc.


Again I know other halves are not supposed to, but I also love my father in-law to bits and hubby’s step mother.


Even hubby’s brothers try and help wherever they can, either by mending our broken DVD recorder so we can sell it for extra cash, or just by listening to hubby when he needs to rant.


I must mention our friend Terry who is a true friend. He’s given us lifts when we’ve needed them when he could – even though he live MILES away from us! He took us to hubby’s ESA assessment - and any regular readers of this blog will know that ended up with an ambulance being called and hubby being rolled out of the building in a wheelchair! I really do think if Terry wasn’t there that day I would have gone to pieces.


He’s also come over to visit when he can and always lets me and hubby talk about how we are feeling. Last time he was over he even gave me some fatherly advice. Thank you mate, you really are true friend. You’ve seen hubby and me at our worst and have stuck by us. We will have to arrange something for the New Year.


Support is so important. Not just for the person that is ill/disabled, but also for those that care for them. I’d like to take this opportunity to say a special thank you to all of hubby’s family for all their help and support ever since I’ve been lucky enough to be a part of their family.


Take care of each other and have a good Christmas