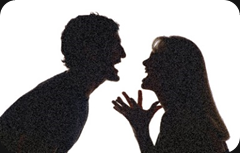 I was in two minds to write this blog entry and that is probably why i have waited so long to write it………..anyway here goes………….
I am sure a lot of other carers will be able to relate to what I am going to write about. I love my husband very much and he loves me very much, but since I have become his carer there has been a battle going on between us.
My husband can be very stubborn and so can I. Also my husband is still coming to terms with the fact that he is ill/disabled and needs a carer. So because of this most days he will not listen to me. I seem to know his limits more than him and i seem to know when he’s doing to much. It doesn't take much for my husbands body to get worn out, he will do something as simple as to try and make a cup of coffee and he will be tired. But despite the fact he knows all this and I'm always telling him, he will still try and do things he just can no longer do. It’s even worse when we go out anywhere. He will refuse to use his wheelchair and he will also sometimes get frustrated when i tell him not to do something because I know the affect it will have on him…
Some days I do feel like I'm constantly telling my husband no. I almost feel like a mother telling her child to stop being naughty! This is not how i want mine and my husbands relationship to be like, I want to care for him but i hate what sometimes seems like a constant battle between Carer vs Caree.
A few weeks ago i was really struggling with my caring role because i felt like i was forever having a battle with the person i love so much. I even thought about not being my husbands carer any more because of the battling, I felt it was affecting our personal relationship which being a carer for a loved one can do.
So what stopped me? I think it was mainly the support of other carers on Carers Connected. Just letting how I felt out and then being told it was normal and just knowing the support is there for me (even if only emotional support) from people that understand how I feel.
I did eventually speak to my husband about how i was feeling and he admitted he is a handful…the battle is still going on, some days worse than others and I think there is no real solution to this, but we’re both aware of it and trying …..

One of the lovely ladies who runs the page Carers Connected also runs Recovery Castle  was founded in 2012 by individuals affected from a range of mental health difficulties. It aims to encourage and empower those affected by mental health difficulties through peer support, both online and through local community workshops.
Carers Vent Twitter
Raspberrytalk Twitter
Carers Vent Facebook